The George “Gera” Pavlovich Panteleyev Award is conferred annually on the MIT-WHOI or WHOI Graduate Student in the graduating class for that academic year who best exemplifies the commitment to improving the graduate education experience and graduate student life at the Woods Hole Oceanographic Institution.

This award honors the memory of George “Gera” P. Panteleyev.  Gera was an MIT-WHOI Joint Program graduate student actively engaged in his Masters thesis research project as the Chief Scientist of a research cruise on the Ob River in Siberia in June 1995 when he was swept overboard in an accident and lost.  His dedication to research in conjunction with improving life for his fellow Russian citizens and his enthusiasm for graduate student life at WHOI were much admired.

The George P. Panteleyev Award consists of a plaque with the recipient's name and the date engraved, and a cash award.  Nominations are sought each year from current and graduating Joint Program students, as well as faculty and staff.  The award is presented at the annual WHOI Graduate Reception in June and Commencement every 5 years. 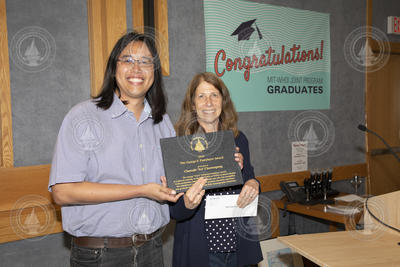